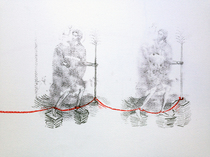 The artist uses the notion of the ‘other’ and combines it with the concepts of absence and invisibility, in order to compose an imaginary connection between identity, memory, space & time through “the other”. In her recent works to inquire the meaning of ‘absence’ within the collective memory, she focuses on urban transformation, which causes disappearance, invisibility, isolation and otherness within the framework of communities, history, time­space and memory.

‘’Blind Topographia’’ is an ongoing drawing serie from 2014 – 2015 which focuses on the notion of mapping invisible or unknown perspectives through aspects of time, history and geography.

The term topography in ancient Greece is originated as the detailed description of a space. The word comes from the Greek words τόπος (topos, "place") and -γραφία (-graphia, "writing"). In classical literature this refers to writing about a place or geographies, what is now largely called 'local history'.

Oral history, whose storytellers and protagonists change throughout time and space, enables future inheritors to transmit those narratives by neither destroying but rebuilding history or the past . Through this recreation, invisible fragments of history as remainders within memory are situated in different existential topograhpies.

The iconographic elements and figures within ‘’Blind Topographia’’, who are either blinded or covered by records of time, seems as if they unconsciously or forcefully move towards  unknown landscapes. Icons which have a special role within daily life since centuries as objects that not only reflect spiritual knowledge but mainly as invisible spectators of the physical world, who keep on recording every aspect of life. Within this serie they become the storytellers that reenact the reconstruction of memory as inheritants of time.

Each unseen step of the figures towards the invisible perspectives, defines new routes for mapping history . The fact of future, being the unknown, creates a sense of blindness, yet eventually as it is said ‘’all rivers fall into the sea’’ .