English, Russian, a little French, a few words in Armenian 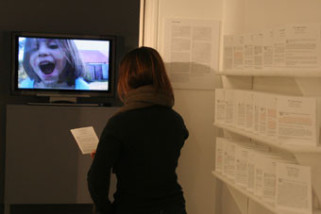 The work is mainly, but not limited to, artist’s books and text based art. I see it as a continuation of my earlier studies in Russian literature, and a central intent with each project is to explore aspects of literature, narrative, and textual theory in a visual way. The pieces are meant as both visual works in their own right and also as an alternative to verbal literary criticism.
Projects have explored issues of translation (in a book about Lermontov’s Taman), of narrative fragmentation (works about Don DeLillo and Jorge Luis Borges) and the shady line between fiction and reality (in Real Fiction, an artist’s book about José Saramago).
A recent book, From Ararat to Angeltown, is about trends in post-Soviet Armenian literature and the Yerevan based writers' group Bnagir.

Another recent work is The High Window, a short film and accompanying book object – an 'intermedial' piece - about ways in which the mind visualises fiction.﻿

2006 With colleagues in the book artists group FACTION, teaching two day workshop on abstraction and representation in the artist’s book, Tate Britain, London.

2006 FACTION exhibition at University of the West of England, Bristol.

2005 Gartal at Cornelia St Cafe, New York: Launch and reading of From Ararat to Angeltown.

2004 Residency at the Armenian Centre for Contemporary & Experimental Art, Yerevan.

2001 Obviously, no one expects to discover anything group show, Foyles Gallery, London.

2000 Made in Southwark Public spaces installation at Quinlan’s Opticians, London.

﻿Bonkers on the Head: artists’ film, artists’ books, and intermedial blending, in Sense:Absence, catalogue to the exhibition, London: FACTION 2005Artist’s books and the virtual, commissioned writing project for the online journal How2, Spring 2006﻿

The Tate Library, British Library, UCLA, Columbia University, Art Institute of Chicago and various other public and private collections in the US and UK﻿